Departing from conventional wisdom, behaviour is about acting in order to perceive the world as we want it, not about reacting to stimuli or predicting appropriate outputs. Traditional approaches to behaviour, Computational Artificial Intelligence, Behavior-based Robotics and Cognitive Psychology, have fundamentally misunderstood the nature of behaviour within living systems. Rather than behavioural output being defined, or computed, from cognitive models based upon perception, that output is varied in order to keep the perceptual input at desired values. In other words, behaviour is about controlling the way we perceive the world.

For example, catching a baseball is not about the computation of trajectories and intercept points, but merely about keeping the speed of the ball on the retina constant. 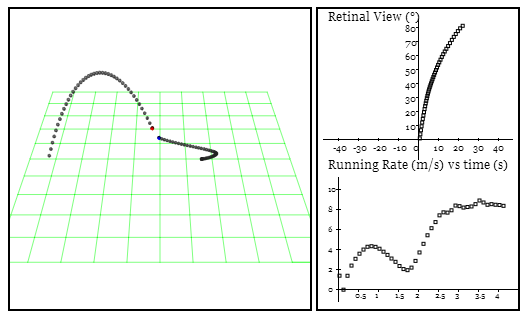 The Prediction Fallacy. Complex behaviour derives not from predictive models, but from simple perceptual control.Try out the demo for yourself at goo.gl/jBOcmQ.

As it is not action but the consequences of action that are being controlled there is no need for complex mappings that select behaviour from perception. It is not action that is selected or computed, but it is perception that is controlled, from which emerges the behaviour that we observe. This has profound implications for our understanding of the behaviour of living systems and indicates that much of previous research and methodology within Cognitive Science requires drastic re‐evaluation.

The perceptual control perspective also has significant implications for understanding psychological issues. The theory indicates a simplified view of psychological pathology as being control problems, the main source of which is conflict between internal systems trying to control the same perceptions at different values. This leads to a minimalist approach to psychotherapy, called the Method of Levels, which encapsulates what is actually effective in all therapeutic approaches.

At the heart of the Perceptual Control architecture is a simple, universal feedback process that applies to all levels and types of behaviour. That process is inherently adaptive and able to counter the unknown disturbances of the real world. When arranged in a hierarchy the basic process enables the complexity of behaviour observed in living systems. As the basic operation is to bring the perception to match an internal, desired value this embodies the system with purpose.

Complexity from Simplicity.
Complex behaviour arises from a multitude of simple perceptual controllers.