The theory behind Perceptual Robots presents a view of behaviour as being a side-effect of the control of inputs within hierarchical sets of negative feedback control systems. The role of the output of the systems is to bring in to line, and maintain, the inputs, or perceptions, at a desired level. The underlying foundation, Perceptual Control Theory (PCT), describes how the behaviour of living systems could arise from such a configuration of perception controllers in contrast to the conventional stimulus-response model whereby output is generated as a function of input.

Even a cursory glance at an everyday example of behaviour demonstrates that the stimulus-response view does not provide an adequate explanation. Consider a man in a bar who switches on the television in order to watch football. Some of the people in the bar turn to look at the screen, which seems to be a classic response to a stimulus, of the football on the television. But what about those who did not turn to watch; same “stimulus”, but no response? And how about the guy who switched on the television in the first place; no stimulus, but a “response”?

PCT, as a theory of purpose-driven behaviour, can easily dispel any confusion. All of the participants have purposes, internal motivations, which are individual to themselves. The first person has a goal to watch football so acted to achieve that goal by switching on the television. The other watchers have an on-going football-watching goal which came into focus when the football became available. The remaining people lacked any goal to watch football so showed no interest. 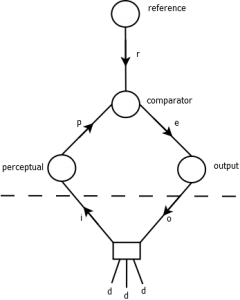 The basic perceptual control unit. Each function (the circles) transform one or more signals (the lines) to other signals.

The main components of a generalised PCT control unit are shown in the figure. The lines represent signals and the circles functions, which transform one or more signals into other signals. The components approximate to neurons of the nervous system, and the type of basic operations thought to be performed by them, with the signals being the equivalent of neural impulses.

Above the dashed line is, the perceptual function which emits a perception signal, p, based upon its
input signals, perhaps a weighted sum, the reference signal, r, which represents the desired value of the perceptual signal,  the comparator (comparison function) which compares (usually a subtraction) the reference and perceptual signals, and emits a corresponding error signal, e, the magnitude of which represents how far the perception is from the desired (reference) value, the output function, which transforms the error signal in to some output, o, of the whole unit. At the interface with the physical environment this might be a signal to change muscle tension.

These components comprise a basic control unit which would be replicated at many different levels in a neural hierarchy, Hierarchical Perceptual Control Theory (HPCT), with perceptions dependent upon those from lower levels and the references dependent upon the outputs from higher levels. At the lowest level there is the interface with the environment, as shown in the figure, by the dashed line, where the inputs are the signals perceived by the sensory system and the outputs affect the musculatory system. The box represents the feedback path, that is, everything that physically affects the perception, in the environment, which includes the output and any disturbances.

The operation of any PCT system requires that the output affects (feedback) the perception, in such a way that it is brought closer to the reference state, thus the error is reduced (the feedback is negative). For any unit in the hierarchy the output of the unit could be thought of as setting, or contributing to, a lower level goal, that would help it achieve its own goal.

As can be seen from the diagram, the perception is affected not only by the output of the control system, but also by any environmental disturbances, that is, variables which are not directly sensed. For example, when driving, the goal is to control the perception of the position of the car on the road. However, there are many factors, such as wind, road conditions and tyre pressures which may have an effect on the position. These disturbances are only indirectly detectable due to their effects on the controlled variable, the car’s position. However, there is no need to detect disturbances as the outcome of the operation of a perceptual control system is to protect the controlled variable from any disturbances. If anything were to disturb the variable then (within physical limitations) the error would increase and, so, there would be compensatory output to bring the perception back to its desired state. It follows from this, that a control system can be at a state of rest, in that there is no error, but there could be non-zero output which would reflect the sum of disturbances. For example, the steering wheel may be turned one way to counteract the wind acting upon one side of the car.

The operation of the iris in the eye is another, simple, example of a perceptual control system. A particular amount of light is desired by the system. The discrepancy between the desired and actual amount drives the dilation and contraction of the iris; if there is too much light the iris closes and if too little it opens, until there is no discrepancy (zero error). Recent iris research  indicates that a variable reference state is present, which would be expected by PCT and would explain why the size of the iris changes in different situations even though the ambient light remains constant. A lack of (observed) behaviour does not indicate lack of control. A man standing at a bus stop may appear to be doing nothing, but he is actually controlling many things simultaneously, such as his sense of balance, and his upright body position, which would wilt and wither to the ground if tension
were not applied to muscles in order to maintain that perceived position. In contrast to the conventional view of the behaviour (output) of a system being a function of the input and the goal of the system, the operation of a perceptual control system is not to produce or regulate a correct, or specific, output, but to vary the output to achieve the desired input. The iris system that controls the light falling on the retina has physical limitations, but there other ways humans can control that light; squinting, wearing a baseball cap, switching the room light on, shading the eyes with a hand, wearing sunglasses or turning a dimmer switch. The means vary but constant throughout is the common goal of the amount of light falling on the retina.

It should be noted that the functions and signals in the control systems do not act in a serial manner, but all act simultaneously and continuously.

The PCT view of living organisms as systems with explicit internal motivations, as creatures which are purposefully scurrying, or swimming or flying or driving, around in the world to achieve desired goals is a more credible and comprehensive explanation of behaviour than the impression given by the stimulus-response perspective of animals as automaton-like systems blindly responding to environmental stimuli without any internal purpose.

Perceptual Robots has successfully implemented this theory in a set real-world robots for a proof of concept as a springboard for developing flexible, dynamic robotic systems.