Here is a demonstration of a basic perceptual control autonomous agent that adapts to its environment in order to achieve its goal. It does so by changing the way it perceives the world. The environment of the agent comprises a natural image.

The framework and model used here is an early step towards a perceptual control model of visual recognition and visual feature hierarchy development.

The perceptual control agent, represented by a red cross-hair, will start moving through the image in the top-left.

The (visual) environment of the agent is the grey-level values of one row in the image. These are displayed as the blue line in the bottom-left graph (the red line is the mean value). The gold line in that graph is the goal value (the reference) the agent wants to achieve.

When the pixel value is the same as the goal, then the agent will stop moving. However, as you can see the goal value (initially 200) is way above the blue line. So, the agent never perceives its goal and, so, never stops.

Now, click the Perception checkbox. This adds the magenta line which represents what is perceived by the agent, rather than the environmental inputs (the pixel values). The perception is the “weighted” input. Initially, these are the same as the weight value is 1.00.

Learning takes place automatically by adjusting (reorganising) the weight value until the goal is reached. Watch this happen by kicking off learning by checking the Learn checkbox.

You can speed things up a great deal by dragging the speed scrollbar to the right hand side.

If you would like to see learning continue, then uncheck the Goal box.

The display items and controls are as follows:

The left column from the top.

The image which is the environment of the agent. You can click in the image to change the environment to a different row. If you move the mouse over the image you can see displayed the pixel values by row and column.

Reference scrollbar – to change the goal value of the agent.

Image drop-down – select a different image as the visual environment.

Control System – the display of the values of the main control system loop; the reference, the perception, the error (difference between reference and perception) and the output (the image column).

Speed Scrollbar – the speed of the demo. The initial value is “normal” speed. Move the scrollbar to the right to run the demo up to 50 times faster.

If you click on the blue or magenta line you can see the value of the plot point.

Also shown is a green dot which is the ratio of the reference divided by the weight. Can you work out what value that ratio converges to, due to the process of reorganisation?

The right column from the top.

Error Graph controls – below the error graph are displays that show the actual values of the error and weight plot values. Also, are two controls which determine the number of points in the plot; the default is 1000.

Error Response – the error response is the persistent error within the system rather than the error at one point of time within a particular control unit. It represents the history of the error, in this case over a period defined by one cycle of perceiving the environment; the number of columns in the image (400 iterations).

There are two methods implemented here:

Weight – this drop-down box allows you to change the weight value manually to see how the reorganisation happens from different starting points.

Tumble – clicking this button will select a new direction of change. If one of the Ecoli algorithms is being used the direction will be random. For HillClimb it will flip the current direction.

Reset – the reset button halts processing and resets some of the demo settings.

The final display component shows the direction of change of the parameter being adjusted. In this case the parameter is the weight of the environmental input, which gives the agent’s perception. The last 10 values are shown to see how it changes. Horizontal is zero and the maximum value of 1 is about 30 degrees off the horizontal.

In addition to the instructions given above, here are a few things to try out to see what happens to the learning behaviour. Try with the Goal box unchecked.

So, the system has unintentionally “found” a property of the environment. There is nothing in the system design that explicitly tries to determine that value; it is a by-product of a closed-loop system controlling its perceptions and adapting to the environment.

If you are interested in looking at this demo in more depth you can try out a few things related to the different types of reorganisation and the types of error response.

Each reorganisation algorithm selects a new direction if, at the end of each period, the error has not decreased.

The initial algorithm, Ecoli, randomly selects a number between -1 and +1, which defines the direction. This can mean that it may go in the wrong direction. However, that is only temporary as that would increase the error, and the system quickly corrects itself. Try this out by clicking the Tumble button when the error is on a descending slope until the sign of the direction is the opposite of what it was.

This image shows an example of this. Although the error reduction goes off track for a few cycles it quickly reverts to the right direction entirely by random selection. 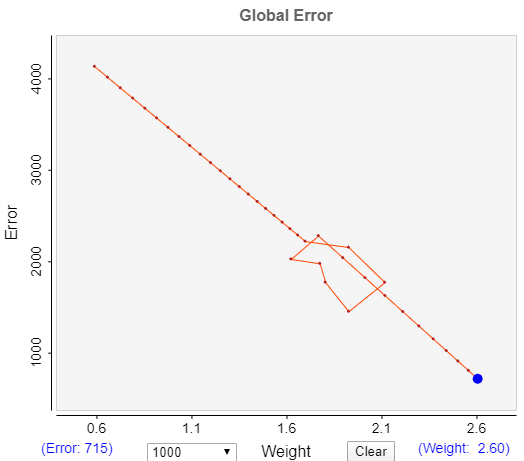 One drawback of the Ecoli algorithm in this current implementation is that the slope of the direction can be very shallow (close to zero) which means that the learning is very slow.

However, that is due to the periodic method of selection. In future demos we will try a method for accumulating the error which would mean that a shallow slope would result in a quicker change of direction.

The issue is partially resolved by the second algorithm, EcoliBinary, which limits the direction magnitude to 1 (not close to zero). It should also be noted that when the error is near zero a shallow slope can be useful to stay in the area of low error.

Try out the Tumble with the other two algorithms, EcoliBinary and HillClimb.

With the methods of error response you can explore the different error curves. Let the error reduce to around zero and then, with the Weight drop-down box, select a new weight that is on the opposite side of the current weight trajectory.

When the error returns to zero you will see the error curve. As these images show the RMSS error “curve” is v-shaped, whereas RMS is a curve. Also RMSS gives a better result for the weight value. In this example the reference is 250 and the mean is 83.79. So, for RMSS the ratio gives a mean of 83.61 whereas RMS gives 86.80. Additionally RMS does not converge to zero as RMSS does. 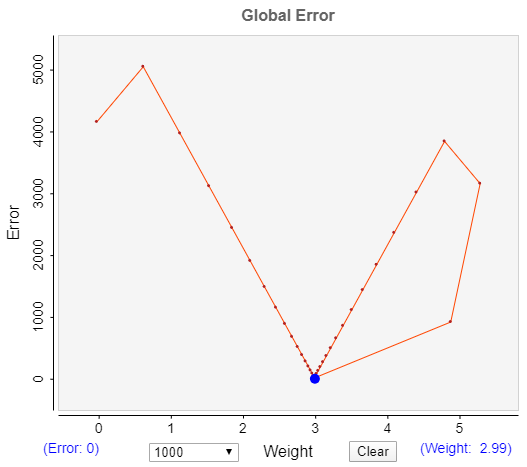 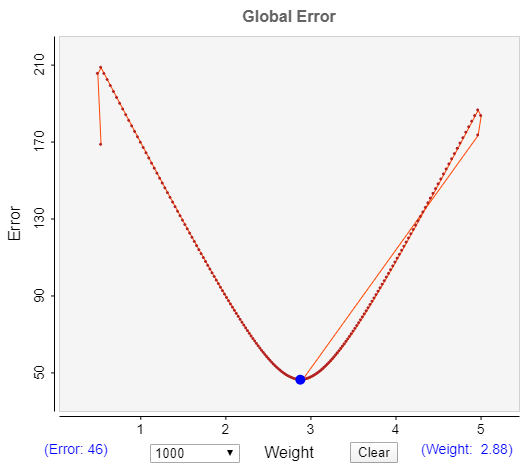 This is a demonstration of a perceptual control system that adapts to its environment.

The system includes the constituent components of a perceptual control loop. Though these are quite basic, meaning the control is very limited.

The environment is quite erratic and discontinuous, as is the perception of the environment so is difficult to control. A comparator function derives an error signal, which is the difference between the reference goal and the perception. That error is used by an output function (a hard sigmoid) which determines whether the agent should move or not. That movement affects the agent’s position in the environment and, so, the perception, closing the loop.

Although the control is limited what the system does do is change the way it perceives the environment in order to realise its goal.

As these demos progress we expect the systems to be able to develop perceptions that are more sophisticated, high-level combinations of inputs, leading to much easier and smoother control.

1D – the agent’s environment is one dimensional; one row through an image.

Single pixel – the perception of this agent is derived from just a single pixel at a time.

Proximal – the field of view of the agent consists of only the pixel at the agent’s current position. It cannot see pixels at any other position.

Adaptive – the structure of the control system adapts, by adjusting the input weight in such a way that the overall system error is minimised.

Binary – The output of the system is binary 1 or 0, based upon the presence or not of error. If there is error, then the agent moves 1 pixel to the right.